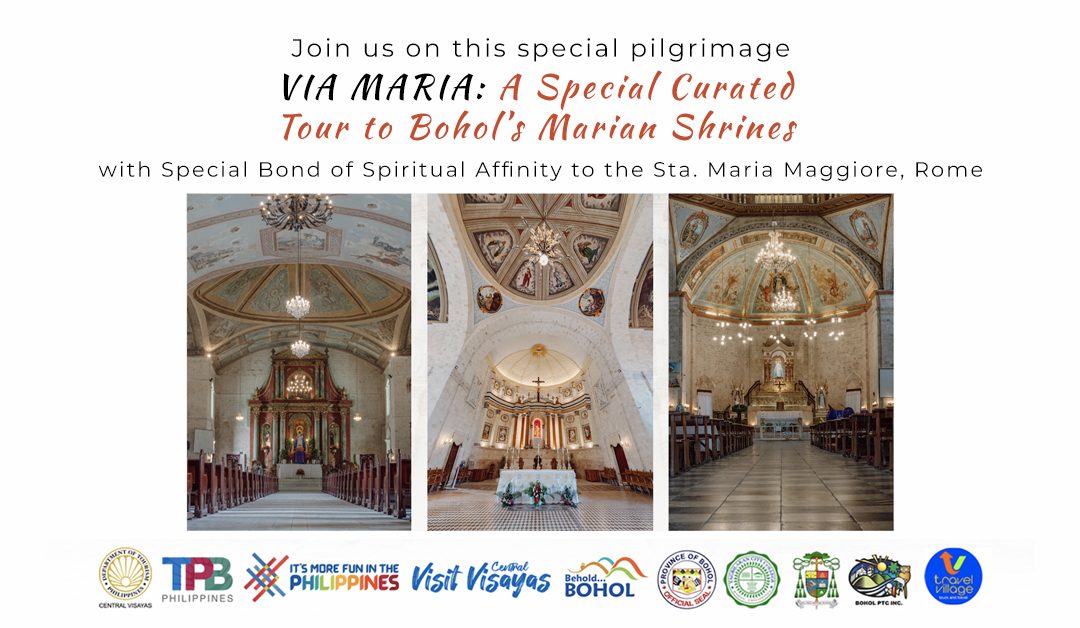 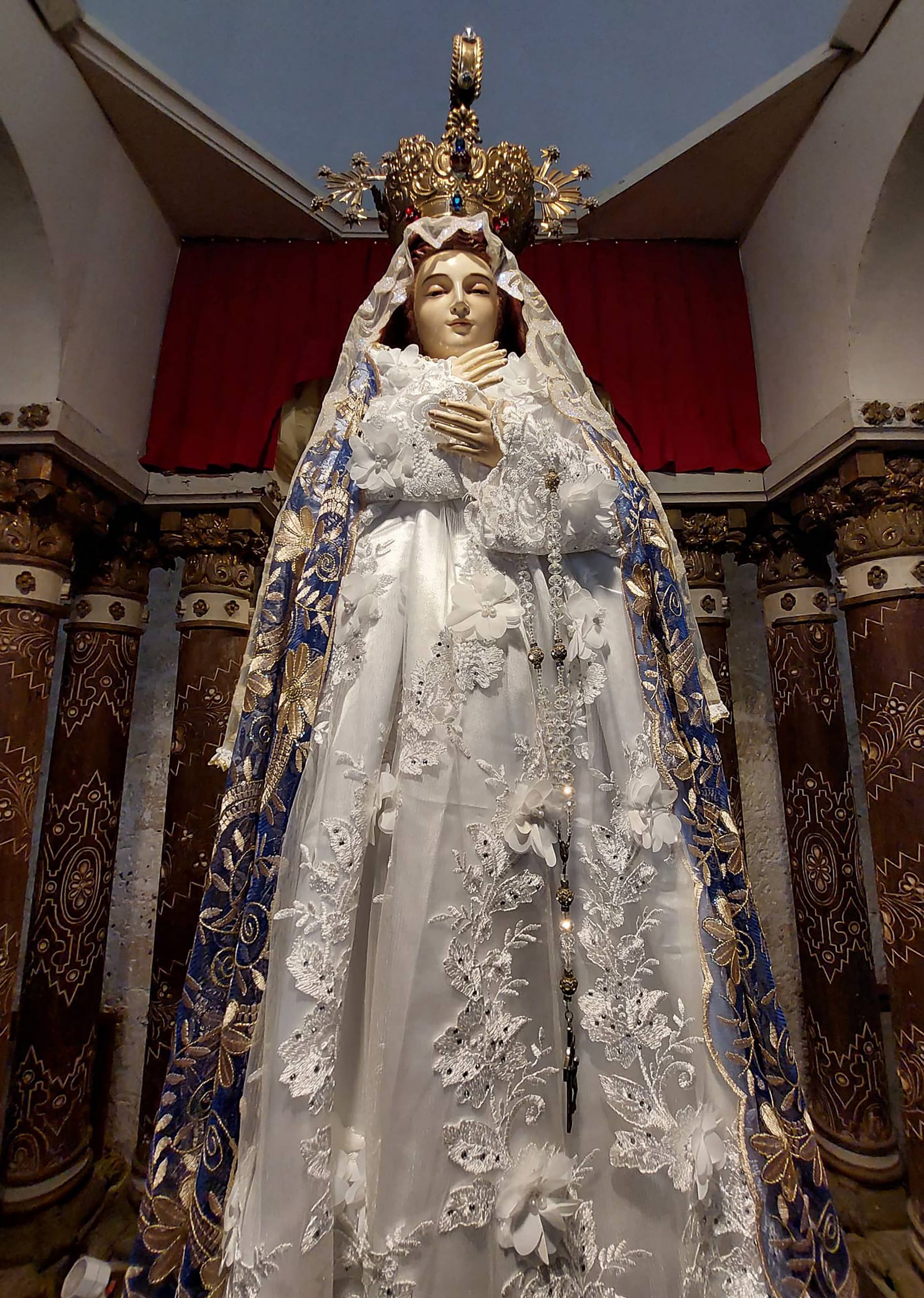 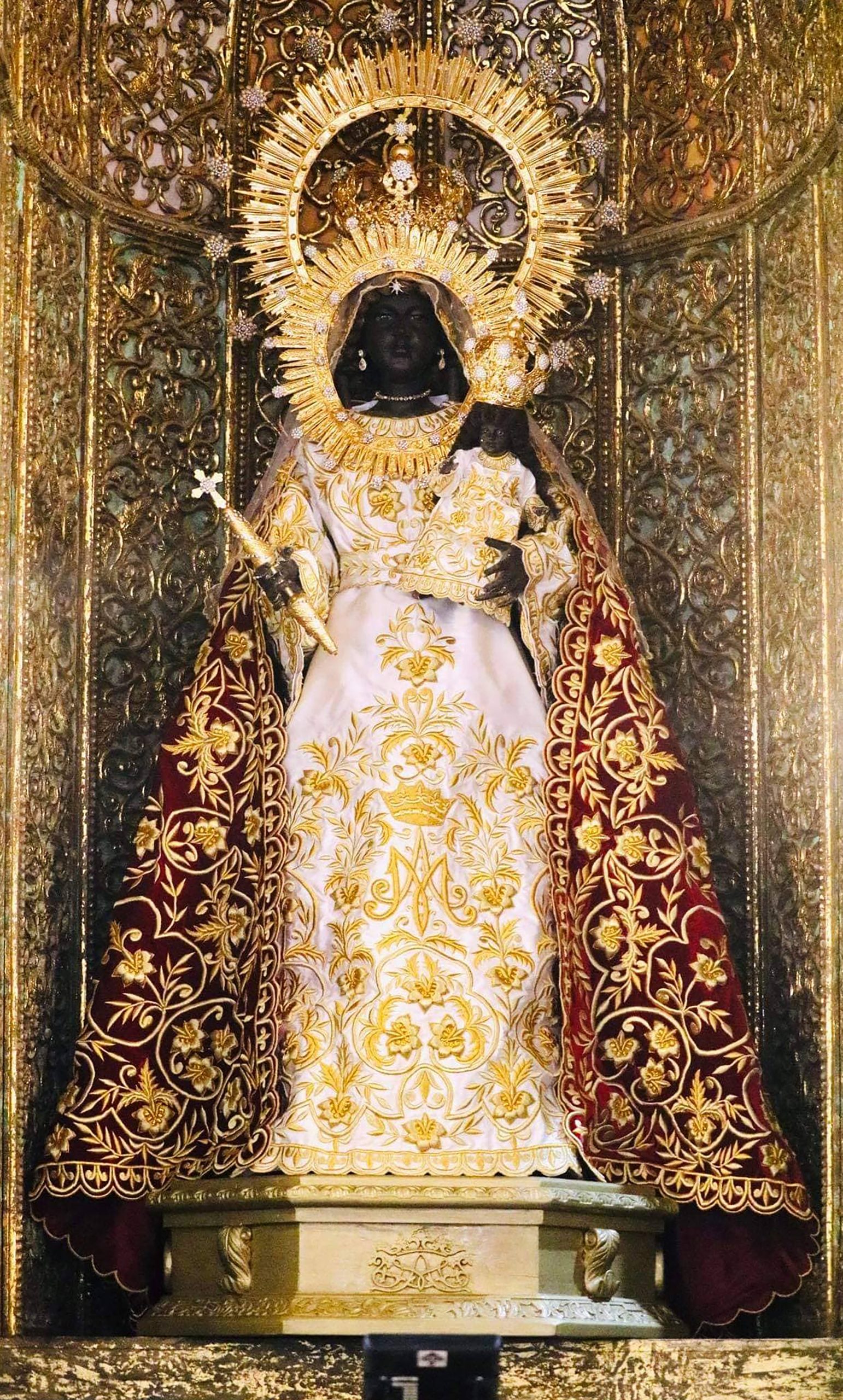 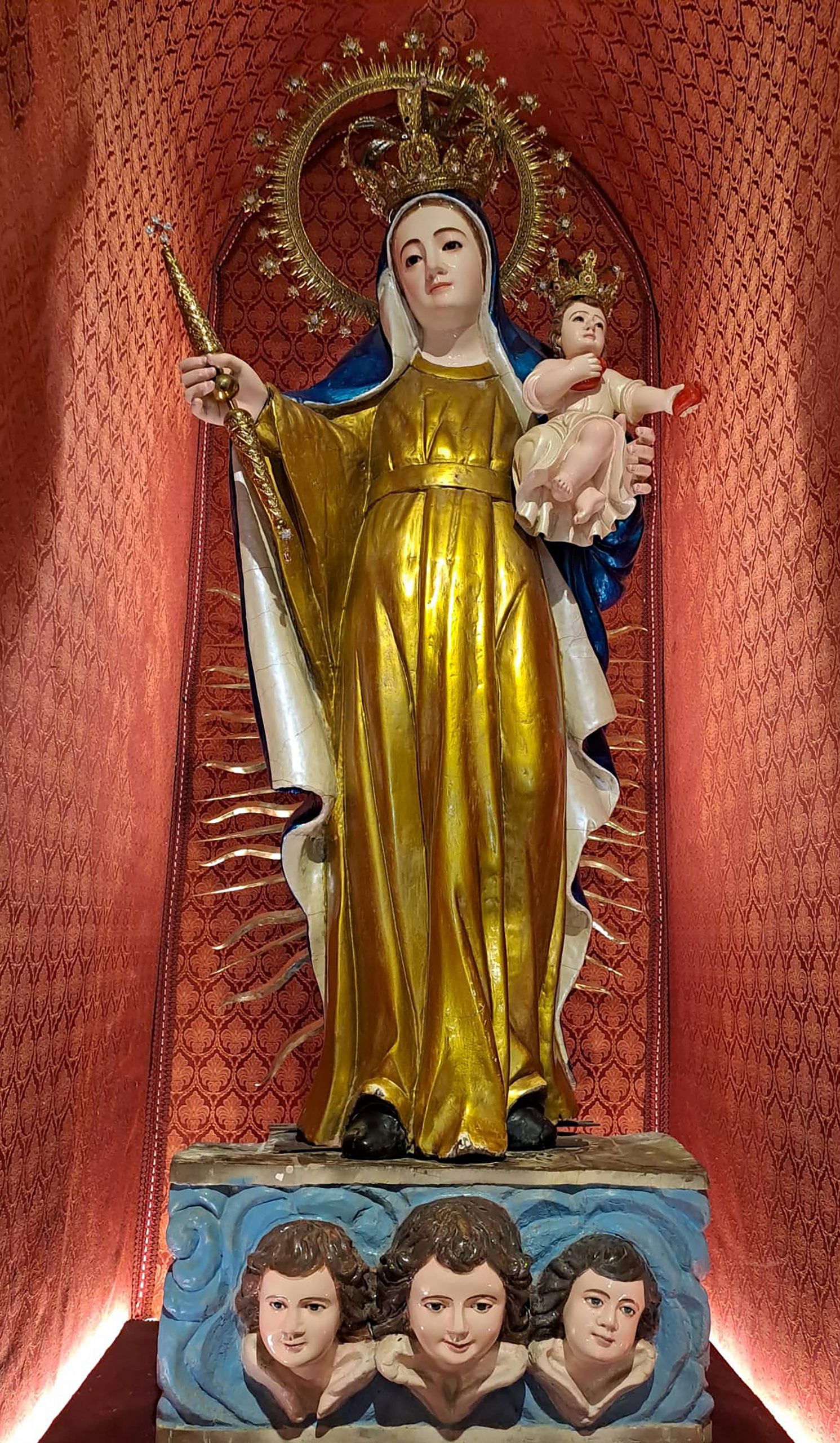 The Basilica of St. Mary Major (Rome) and the Apostolic Penitentiary have established a “Spiritual Bond of Affinity” between the Basilica of Saint Mary Major in Rome and three Shrines of the Blessed Virgin Mary in Bohol. These Shrines are the Diocesan Shrine of Our Lady of Assumption (Dauis); Our Lady of Guadalupe de Extremadura (Loboc); and the Our Lady of Light (Loon). With this bond of spiritual affinity, one can make a pilgrimage in these Shrines and enjoy all the spiritual benefits (plenary indulgences) as if we were able to pray at the Papal Basilica of St. Mary Major, the first known Basilica dedicated to the Blessed Virgin Mary. 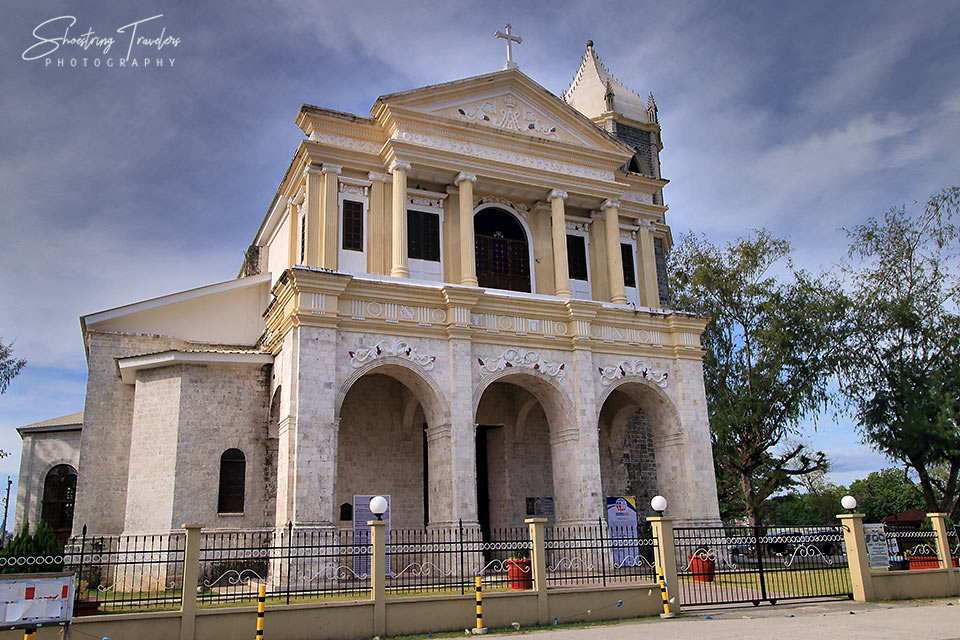 Dauis Church was built in 1697 by priests of the Jesuit Order and in 1753, Fr. Joseph Nepomuceno, S.J., built a convent in the church complex which became the official residence of the Jesuits from Loboc.

Fr. Julio Saldana began to construct the present church in 1863 and was later finished by Fr. Natalio del Mar in 1923. In the same year that the construction was completed, the church was inaugurated by Messenger Juan Gorordo of Cebu.

The church’s convent was also used as a shelter in World War II by nuns from Tagbilaran City. In 2004, Dauis Church was designated as the Shrine of Our Lady of the Assumption.

A portion of the church’s front and the portico was damaged when a 7.2 earthquake occurred in the provinces of Bohol and Cebu in 2013. In 2015, the National Historical Commission later restored the church complex before being turned over to the Diocese of Tagbilaran in 2017. 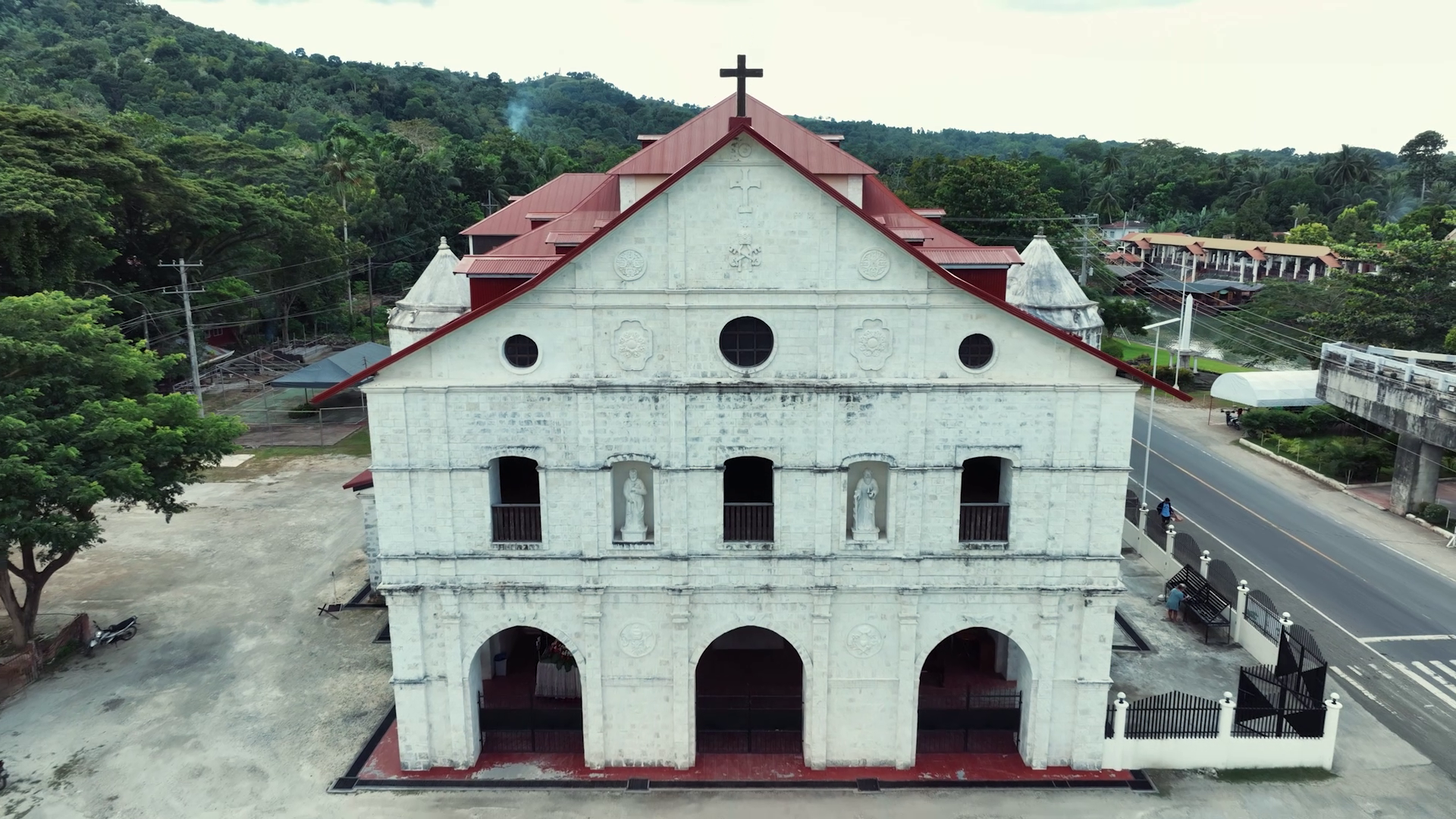 After the Jesuits established the Christian community in Baclayon, they moved to Loboc and established a second Christian settlement in Bohol. The parish was established in 1602, and the present coral stone church was completed in 1734. Because of its strategic location, it became the center of the Jesuit mission in the Bohol area. In 1768, upon the expulsion of the Jesuits, the town was transferred to the Augustinian Recollects.

It was severely damaged when a 7.2 magnitude earthquake struck Bohol and other parts of Central Visayas on October 15, 2013. 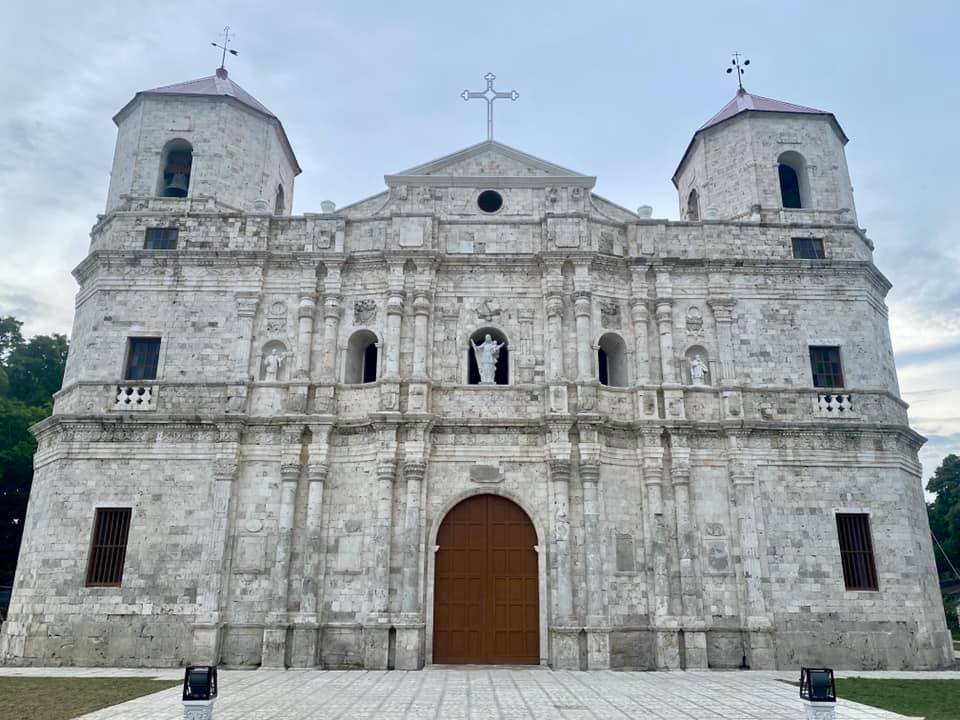 On December 6, 2010, the National Museum of the Philippines declared the Nuestra Señora De La Luz / Our Lady of Light Parish church of Loon, Bohol as #NationalCulturalTreasure (NCT). This was declared as complex together with the Inang-angan Stone stairways, the Old Convent, the old Mortuary and the Circular Cemetery near its vicinity.
The #NuestraSeñoradelaLuz was established on June 22, 1753 by the Jesuit mission in Loon, with a provisional church complex utilizing indigenous materials. With the departure of the Jesuits in 1768, the Augustinian Recollects took over the parish on 21 October 1768. Due to the frequency of the pirate raids, the church complex was moved to its present site, and a provisional church and convento with tabique walls on a low stone base was constructed in 1780, with fortifications surrounding it.
Another church was built in 1815 but was destroyed by fire, and another was erected in 1853. From 1847 to 1850, the broad and measured grand flight of 198 cut coral stone stairs now locally known as Inang-angan was constructed.
In 1855, the Spanish Augustinian Recollect José García de la Virgen de los Remedios, Loon Parish priest that time, built the coral stone church. The construction project was drawn according to plan by Domingo de Escondrillas, Director of Public Works in Cebu, the completion of which resulted to one of the largest, grandest, and finest churches in the Visayas. For its size, the #LoonChurch had only two sloping buttresses, on each side of the transept. The facade exhibited baroque characteristics and was flanked by twin bell towers. The image on the facade was that of Nuestra Señora del Cetro (Our Lady of the Scepter). The narthex of the parish church was separated from the nave by subtle concave pilasters. The nave of the parish church was the widest in Bohol, the ceilings and walls were covered with paintings of garlands and medallions done by a local artist, while the #ceilingpaintings were painted by Ray Francia in the 1920s and 1930s. All three retablos in the transept and sanctuary were neoclassic in style and were occupied by 19th century images of Recollect and Augustinian saints.
The Nuestra Señora de la Luz Parish Complex had outstanding social and spiritual significance to the community of faith, evidenced in the community’s strong affection for the church that contributed to the community’s identity and social unity. These qualities of the church captured the keen eye of the panel of experts of the National Museum and declared it an #NCT.
Minor repairs on its coral stone walls was planned by the Restoration division of the National Museum in 2013 but all the plans fell with the total collapse of the structure after the 7.2 magnitude earthquake that hit Bohol on Oct. 15, 2013, with the complex in total ruins.
The #NationalMuseumPH exerted efforts on its mandate to protect, conserve and restore all declared Cultural properties in Bohol, especially of bringing back the grandeur of the Loon Church complex. Reconstruction and restoration works of the complex is currently ongoing with the famous Inang-angan Stone stairway brought back to life. The church is now in 83% completion but due to the #Covid19 pandemic, the reconstruction work is on hold. Hopefully, when things settle down, the restoration will be back on track.
#CulturalHeritage #BuiltHeritage #Bohol #Loon #PreEarthquake #2013BoholEarthquake #TreasuresofBohol
Source: Museum Declaration # 4-2010
Share This